This was a group show at CB1 Gallery downtown March 20 -April 18. 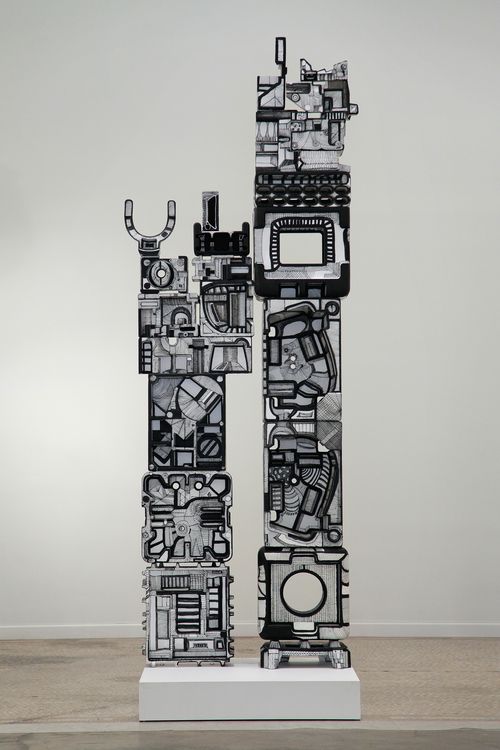 The recent series, Separation, grew, primarily, out of several factors. The first; Obama won the presidential election and a feeling of hope and possibility returned to my work. Two; the purchase of a parabolic heater to replace the dangerous propane heater in my studio gave me the first form for the series on which I drew. This caused me to collect as much Styrofoam as I could, drawing obsessively, fast and furiously. Three; a conceptual need to continue to make work that spoke "about" something, though the meaning was less didactic than in work made in the preceding years since 911.

This work is the most "me" of any that I have completed to date. By that I mean to say that it is the least self-conscious or directed, void of a clear narrative or concrete idea. I allowed myself to spontaneously embrace my joy of drawing and return to sculpture. The form dictates the design. At times, the negative space of the object within the form is clear and highlighted. It is reminiscent of photographs of the devastation in Hiroshima or Nagasake, where a clear imprint of an object or being was preserved in outline on the surface of the sidewalk or building. It also references an archeological dig. It questions the human beings' desire for consumption and the vast quantities of excess material created from that act.

I want to see the piece exist, seamlessly, in a space; the ceilings, walls and floor becoming an integral surface. The space becomes the piece in entirety.

Mimicking human DNA as well as melanin, Revolving Door (Life as Chance) is
an actual revolving door made up of (non-breakable) test tubes, each filled
with a random solution of light reactive fluid, some getting darker with
prolonged exposure to light.